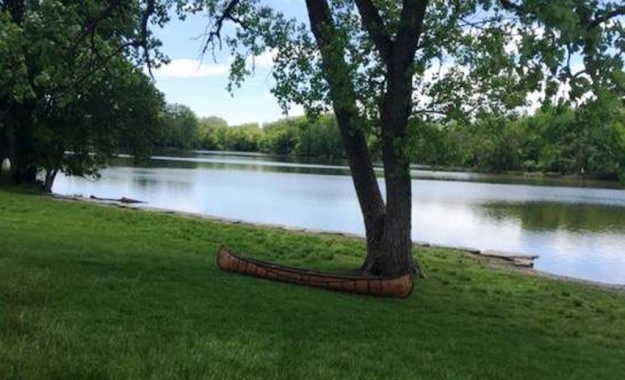 On May 30th I had the opportunity to visit Northwestern University and the folks affiliated with the Humanities without Walls grant group organized by Dr. Kelly Wisecup to discuss canoes and the relations of the Potawatomi people to the Chicago area. Specifically, I  spoke  about how the geography of the area made it a perfect place for Wigwas Jiimaan (birch bark canoes). Echicagou (Chicago) is at the North-South continental divide and with the many rivers there the first peoples of the region could travel east to the Atlantic Ocean via the St. Lawrence river, west to the Mississippi and then north to Minnesota, west along the Missouri River, east along the Ohio River or south all the way to the Gulf of Mexico.

We were able to secure a canoe made by Ralph Frese to also talk about the Chicago American Indian Center’s Canoe Club which revived canoeing in Chicago in the 1960’s and 1970’s. We put canoes in at Skokie Lagoon to try out the magic of canoeing and the day was completed with a workshop led by Dr. Margaret Pearce on mapping Indigenous homelands.

It was a great opportunity for me to make new friends and see old friends too. Thank you to everyone for your kind hospitality on a memorable journey.